The subject of today's article is the wireless access point, designed for use in public space with high-density environments (hospitals, educational institutions, large office spaces, etc.). With impressive features and functions for this purpose, EAP737 is not lacking laconic aesthetics in the appearance. The high-quality, fireproof matte plastic housing and light weight of EAP737 bring positive impression with pleasant tactile sensations. 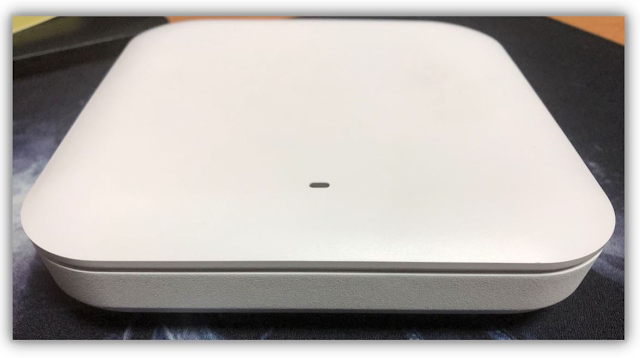 The main features of EAP737:

Full description can be found on the product page:
http://www.4ipnet.com/products/wireless-access-point/EAP737

Let's take a look at some of the specifications mentioned above.

One of the interesting features is the built-in Bluetooth Low Energy (BLE) for location services (indoor location tracking), for example, iBeacon.

2x2:2 MU-MIMO (Multiple Input Multiple Output) is a method of spatial coding of a signal that can increase the channel bandwidth in which data transmission and data reception are carried out by several antennas.

Beamforming - beamforming technology focuses on transmitting signal towards the users to improve the channel from the access point to the client. The technology is implemented by omni-directional antennas and analysis of the data received from the receiver. As a result, the enhanced signal allows more data to be transmitted to customers.

By supporting up to 32 SSIDs (16 per radio), EAP737 can create up to 32 virtual access points that have different authentication methods and encryptions based on access policies.

PoE GbE uplink port - the access point can be powered via PoE, and its operation will only consume 14.4 W, which makes it possible to utilize class 3 PoE switches that supply up to 15.4 W per port.

The user authentication options is also worth mentioning, as for today 4ipnet offers a great variety of choices. Users can register via Facebook, email, guest portal, as well as one-time passwords via SMS. For all this, you would surely need a controller.

The device can be both wall-mount and ceiling-mount. There’s nothing stands out of the accessories which consists of a network cable, a power supply and a mounting bracket.

The combination of the technologies - beamforming, QoS, high speed data transfer, and increased bandwidth (several devices in one MU-MIMO group can transmit data simultaneously), and a reliable and productive element base, altogether give this access point the ability to work in places with a large and a diverse amount of users.

We will not describe the user interface today, as in the previous article we have a rather detailed presentation of its components (there we talked about EAP767, EAP727, and for EAP737 it’s basically the same).
The configuration was performed through the APM100 controller, and its step-by-step Setup Wizard. 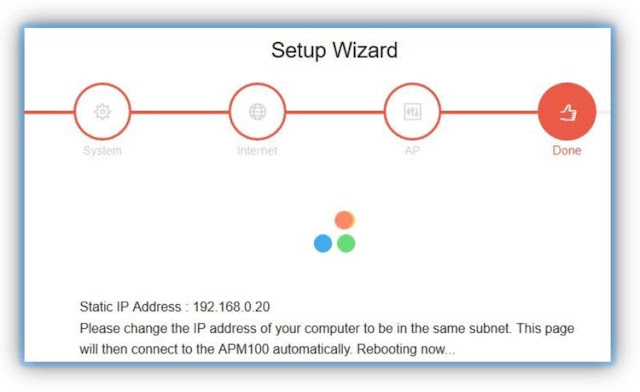 The purpose of this article is to present EAP737, and to conduct a small test of the data transfer rate to the best of our capabilities. To test the maximum bandwidth of the channel, two methods were used. The first was a common transfer of a large file (1C database file, 3GB) from a PC with a gigabit channel (PC with Intel Gigabit CT Desktop Adapter -> HP ProCurve Gigabit Switch -> EAP737 -> PC with Intel Dual Band Wireless-AC 8265). The second test was conducted by using the iPerf utility, or rather, its modification Jperf-2.0.2.

In order to know the maximum channel bandwidth threshold, the test on the 2.4 GHz has not been conducted.

So, under the operation mode (the type of wireless connection) 802.11ac and the frequency of 5GHz, the adapter of the connecting user Intel Dual Band Wireless-AC 8265 has (according to the Intel specification) the maximum speed of 867 Mbps, TX/RX Streams 2X2, 802.11ac, 2.4GHz, 5GHz. Both PCs have SSD disks and 8 GB RAMs. No additional settings for network adapters and access points were made (all by default), except for specifying the 5GHz mode and 802.11ac standard respectively. Although to get the best possible result, it would probably be necessary to optimize, but time was not enough for fine tuning and depth study of all data, and it is unlikely that this would change the situation much.

A simple file transfer from one SSD to another over the network showed the following result: the average data acquisition rate varied at about 500 Mbps (460-490 Mbps), and the maximum rate was 560 Mbps. 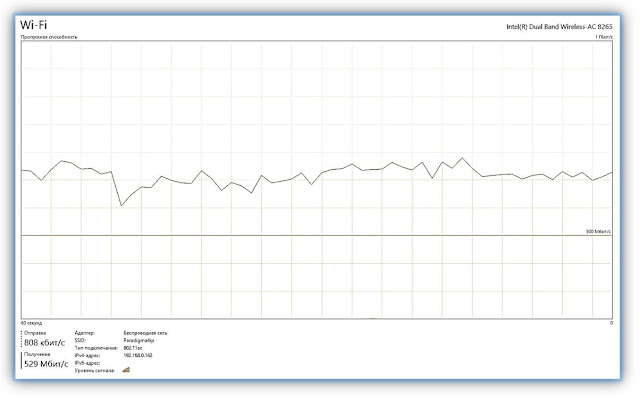 The 50-57 Mbps write speed to the disk roughly corresponded to the network performance. 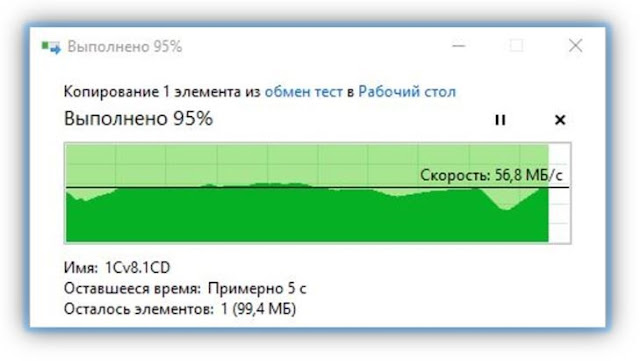 In the settings of the iPerf utility, we gradually increased the following parameters: TCP window size (the size of the 32KB socket buffer), maximum size of the TCP segment, buffer length of the queue for reading/writing. The general results were similar to those of transferring the 1C database file.

Eventually, the maximum result (maximum load per channel) was achieved by setting the TCP window size to 800 Mbit during 60 seconds testing in 1 and 4 streams. Processes (streams) simply divided the approximately 500 Mbps channel, although allowing us to slightly increase the average summing index. 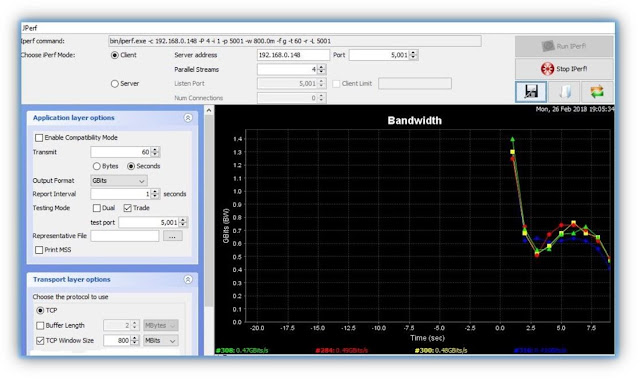 It’s a bit unclear why the start indicators were so overstated, but almost immediately they got reduced to a level of 400-500 Mbps. 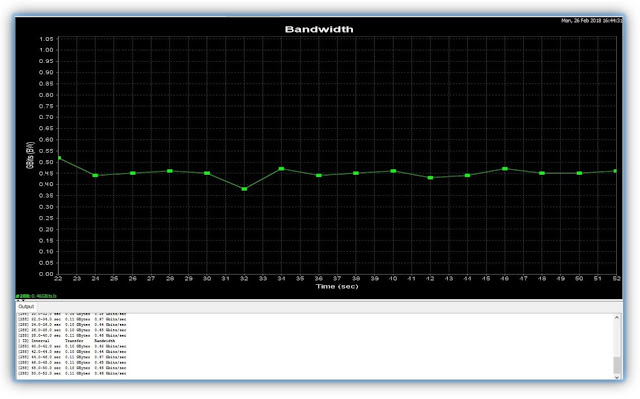 This is an approximately thirty-second chart of one stream testing; the speed varies on average from 450 to 500 Mbps.
We can observe the same result when testing for reception/transmission. First, the data was transferred to the server part of Jperf with an average of 460-480 Mbps; next, the data reception varied in the same range, sometimes exceeding the 500 Mbps threshold. 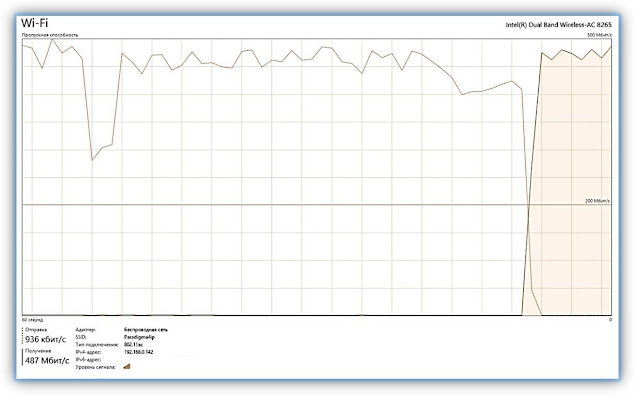 All in all, after testing, we can conclude that the EAP737 shows a very good result, an average of 500 Mbps, expectedly underachieving to the declared maximum of 867 Mbps (5 GHz). Obviously, by using several such access points, load balancing policy, quotas, the second range of 2.4 GHz, etc., the channel performance of 500 Mbps will be enough to allow a lot of users to access the network.