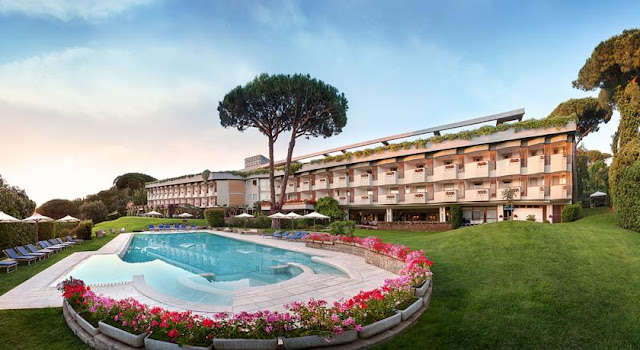 Located near the beach in Punta Ala, Italy, Gallia Palace Hotel is well-known for providing a peaceful and elegant ambience, breathtaking views of the Mediterranean Sea, and fabulous service with attentive staff. From the baronial 1960-style architecture to the exquisite fine dining restaurants, both the guests and hotel management of this five-star establishment expect nothing less than perfect. Free and reliable Wi-Fi is no exception, and given that every traveler today carries a smartphone or tablet, providing ubiquitous Wi-Fi swiftly moved to the top of the hotel’s to-do list. Recently after completing construction of brand new building, Gallia Palace Hotel decided to upgrade its existing Wi-Fi system in order to integrate the wireless LAN of the new building with the existing infrastructure of the old one.

According to the team at Gallia Palace, there were a few primary requirements to fulfill. First, since the access points were distributed across an assemblage of 78 guest rooms over two floors, a swimming pool, two restaurants, a great park, and a private beach 700 meters away, AP monitoring needed to be centralized and simple to operate in order to reduce maintenance efforts. In addition, given that the existing wireless network contained APs from several different vendors and that the hotel did not wish to overhaul the entire infrastructure, the new solution needed to be vendor agnostic. Finally, the hotel wished to separate users into three categories: top, free, and employee, in order to offer differentiated Wi-Fi services such as bandwidth policies for users belonging to each of the assigned roles.

After thoroughly evaluating several solutions, Gallia Palace Hotel decided that 4ipnet WHG315 Wireless LAN Controller and WTG2 Hotspot Ticketing System would best fulfill their needs. The WHG315 is an optimal choice for centralized management of medium-sized wireless LANs, as it supports monitoring of up to 100 third party APs while performing role-based user authentication. In addition, the WHG315 can set up guest accounts and perform traffic shaping to enforce bandwidth and firewall policies. At the same time, the WTG2 is a keypad-based ticket printer that allows the hotel staff to quickly generate and print out account credentials at the touch of a button. Along with QR code automatic login functionality, the WTG2 makes logging in to the secure hotel Wi-Fi a walk in the park.

Gallia Palace Hotel was extremely pleased with the result of the new 4ipnet solution. “The infrastructure has been running for a couple of months without problems. There are now hundreds of customers connected at the same time and no problems have been reported,” according to the team at Gallia. In addition to the comprehensive user access control and wireless network management features offered, the hotel IT staff also found 4ipnet’s technical support staff to be a major plus, providing prompt responses from deployment assistance to maintenance and troubleshooting.
As a hotel that strives to maintain its perfect five-star service, Gallia Palace was very cautious when it came to expanding its Wi-Fi offering – wireless connectivity needed to be stable with wire-like performance in order to keep customers happy and returning. With 4ipnet’s WHG315 and WTG2, the hotel found much more than what they initially sought. “We are extremely satisfied with the system,” concluded the team at Gallia. In today's environment where travelers predominantly use mobile devices, the flexible, reliable, and easy to use 4ipnet solution came out as the top choice for Gallia Palace.