- 5月 02, 2014
Through its partnership with NTT-AT, 4ipnet successfully delivered a comprehensive and competitive wireless LAN solution for higher education. 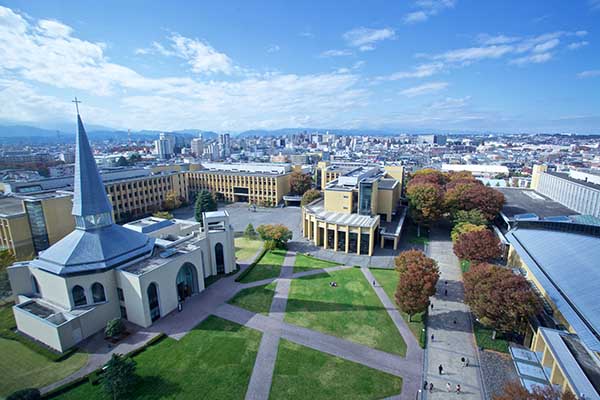 4ipnet, a leading provider of competitive and comprehensive wireless LAN solutions for meeting tomorrow’s Wi-Fi demands, today announced that it has delivered a revamped wireless infrastructure to Aoyama Gakuin University in Tokyo, Japan to address increasing BYOD needs. Designed and implemented by 4ipnet’s partner NTT Advanced Technology (NTT-AT), the solution aimed to enhance the mobility and e-learning experience at the university, and turned out to be a great success.

Proud of its 130-year history, Aoyama Gakuin University relocated its campuses in Aoyama and Sagamihara in 2013. The university consists of 9 undergraduate departments, 12 graduate schools, and more than 20,000 students in total. In recent years, the dramatic increase in usage of smartphones and tablets on campus have put an unpredicted amount of stress on the university’s existing WLAN infrastructure, resulting in poor Wi-Fi connectivity. Although the university realized that upgrading the WLAN infrastructure was necessary, providing a reliable Wi-Fi service for over 20,000 students was not an easy task. In addition to controlling the total cost of ownership, the deployment was expected to be time-consuming and difficult. Therefore, the university began its search for a solution that could provide reliable wireless access under a limited IT budget.

Mr. Mishima, an Assistant Professor from the Institute of Information and Media, recalls the situation: “In 2009, we deployed some APs, but only in certain public areas such as dining halls and common rooms. Since professors and students were increasingly using notebooks or tablets in lectures, they needed high performance Wi-Fi.” Acknowledging the need for an infrastructure upgrade, Mr. Sakata, a Research Associate and colleague of Mishima’s, consulted with NTT-AT on how to address these Wi-Fi needs, and was extremely surprised by the response he received.

“First, I asked about the deployment in classrooms. The number of APs and the plan given really amazed me! They were very precise about where the APs should be deployed through simulation of the building structures and calculating radio wave interference based on the floor plans. I never imagined that this was possible! We held an on-site investigation later on, but the results were almost the same as the original suggestions.” Sakata continued, “The proposed 4ipnet APs were very attractive in terms of cost performance. Therefore, we could increase the number of APs without exceeding the budget, and extend the Wi-Fi coverage beyond what we had originally imaged. Moreover, we realized that it is possible to deploy more APs when necessary, as the network is very scalable.”

“The pressure from students and faculty members has been substantially relieved. The achievement was not only due to the high performance of deployed APs, but also the optimized placement locations,” said Sakata with a smile. “They helped us think in the shoes of the actual Wi-Fi users, and provided us with accurate, concise, and flexible feedback. This is the most important reason why we can rely on them.”

Through its partnership with NTT-AT, 4ipnet has successfully delivered a fully-featured and .competitively-priced WLAN solution to Aoyama Gakuin University. After the deployment, the number of Wi-Fi related complaints has drastically decreased, reflecting both the reliability of 4ipnet’s solution and the high quality of initial deployment planning. With BYOD becoming ubiquitous and mobile usage rising rapidly, institutes of higher education will find that 4ipnet offers a flexible and effective managed wireless network, catering to all types of needs and situations.